Sampling from a latent space of images to create entirely new images or edit existing ones is currently the most popular and successful application of creative AI. In this section and the next, we’ll review some high-level concepts pertaining to image generation, alongside implementation details relative to the two main techniques in this domain: variational autoencoders (VAEs) and generative adversarial networks (GANs). he techniques we present here aren’t specific to images—you could develop latent spaces of sound, music, or even text, using GANs and VAEs—but in practice, the most interesting results have been obtained with pictures, and that’s what we focus on here.

8.4.1 Sampling from latent spaces of images

The key idea of image generation is to develop a low-dimensional latent space of representations (which naturally is a vector space) where any point can be mapped to a realistic-looking image. The module capable of realizing this mapping, taking as input a latent point and outputting an image (a grid of pixels), is called a generator (in the case of GANs) or a decoder (in the case of VAEs). Once such a latent space has been developed, you can sample points from it, either deliberately or at random, and, by mapping them to image space, generate images that have never been seen before 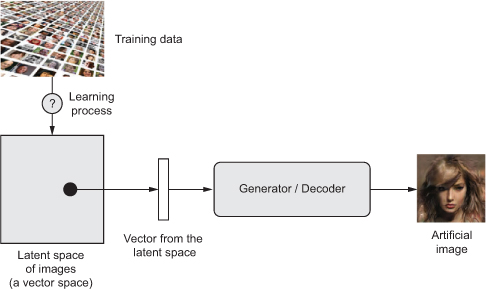 GANs and VAEs are two different strategies for learning such latent spaces of image representations, each with its own characteristics. VAEs are great for learning latent spaces that are well structured, where specific directions encode a meaningful axis of variation in the data. GANs generate images that can potentially be highly realistic, but the latent space they come from may not have as much structure and continuity. 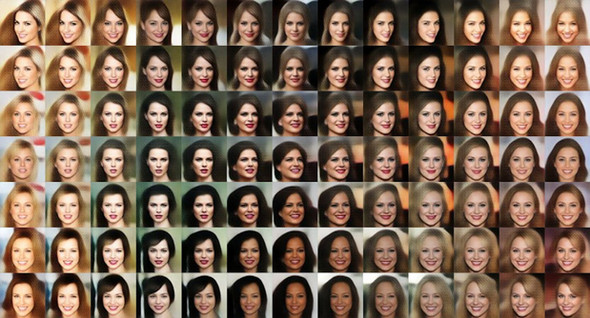 We already hinted at the idea of a concept vector when we covered word embeddings. The idea is still the same: given a latent space of representations, or an embedding space, certain directions in the space may encode interesting axes of variation in the original data. In a latent space of images of faces, for instance, there may be a smile vector, such that if latent point z is the embedded representation of a certain face, then latent point z + s is the embedded representation of the same face, smiling. Once you’ve identified such a vector, it then becomes possible to edit images by projecting them into the latent space, moving their representation in a meaningful way, and then decoding them back to image space. There are concept vectors for essentially any independent dimension of variation in image space— in the case of faces, you may discover vectors for adding sunglasses to a face, removing glasses, turning a male face into a female face, and so on. Below is an example of a smile vector, a concept vector discovered by Tom White from the Victoria University School of Design in New Zealand, using VAEs trained on a dataset of faces of celebrities (the CelebA dataset).

Variational autoencoders, simultaneously discovered by Kingma and Welling in December 2013 and Rezende, Mohamed, and Wierstra in January 2014, are a kind of generative model that’s especially appropriate for the task of image editing via concept vectors. They’re a modern take on autoencoders — a type of network that aims to encode an input to a low-dimensional latent space and then decode it back—that mixes ideas from deep learning with Bayesian inference.

A classical image autoencoder takes an image, maps it to a latent vector space via an encoder module, and then decodes it back to an output with the same dimensions as the original image, via a decoder module. It’s then trained by using as target data the same images as the input images, meaning the autoencoder learns to reconstruct the original inputs. By imposing various constraints on the code (the output of the encoder), you can get the autoencoder to learn more-or-less interesting latent representations of the data. Most commonly, you’ll constrain the code to be low-dimensional and sparse (mostly zeros), in which case the encoder acts as a way to compress the input data into fewer bits of information.

In practice, such classical autoencoders don’t lead to particularly useful or nicely structured latent spaces. They’re not much good at compression, either. For these reasons, they have largely fallen out of fashion. VAEs, however, augment autoencoders with a little bit of statistical magic that forces them to learn continuous, highly structured latent spaces. . They have turned out to be a powerful tool for image generation.

A VAE, instead of compressing its input image into a fixed code in the latent space, turns the image into the parameters of a statistical distribution: a mean and a variance. Essentially, this means you’re assuming the input image has been generated by a statistical process, and that the randomness of this process should be taken into account during encoding and decoding. The VAE then uses the mean and variance parameters to randomly sample one element of the distribution, and decodes that element back to the original input.

The stochasticity of this process improves robustness and forces the latent space to encode meaningful representations everywhere: every point sampled in the latent space is decoded to a valid output.

The parameters of a VAE are trained via two loss functions:

Let’s quickly go over a Keras implementation of a VAE. Schematically, it looks like this:

You can then train the model using the reconstruction loss and the regularization loss.

The following listing shows the encoder network you’ll use, mapping images to the parameters of a probability distribution over the latent space. It’s a simple convnet that maps the input image x to two vectors, z_mean and z_log_var.

Next is the code for using z_mean and z_log_var, the parameters of the statistical distribution assumed to have produced input_img, to generate a latent space point z. Here, you wrap some arbitrary code (built on top of Keras backend primitives) into a Lambda layer. In Keras, everything needs to be a layer, so code that isn’t part of a built-in layer should be wrapped in a Lambda (or in a custom layer).

The following listing shows the decoder implementation. You reshape the vector z to the dimensions of an image and then use a few convolution layers to obtain a final image output that has the same dimensions as the original input_img.