Your goal will be to use this data to predict the life expectancy in a given country based on features such as the country’s GDP, fertility rate, and population.

As always, it is important to explore your data before building models. we have constructed a heatmap showing the correlation between the different features of the Gapminder dataset, which has been pre-loaded into a DataFrame as df 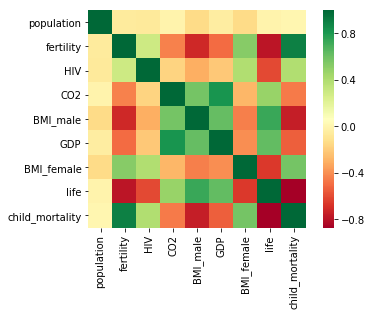 Since the target variable here is quantitative, this is a regression problem. To begin, you will fit a linear regression with just one feature: 'fertility' , which is the average number of children a woman in a given country gives birth to. In later exercises, you will use all the features to build regression models. Before that, however, you need to import the data and get it into the form needed by scikit-learn. This involves creating feature and target variable arrays. Furthermore, since you are going to use only one feature to begin with, you need to do some reshaping using NumPy’s .reshape() method.

The basic of linear regression

A scatter plot with fertility on the x-axis and life on the y-axis has been generated. As you can see, there is a strongly negative correlation, so a linear regression should be able to capture this trend. Your job is to fit a linear regression and then predict the life expectancy, overlaying these predicted values on the plot to generate a regression line. You will also compute and print the \(R^{2}\) score using sckit-learn’s .score() method. 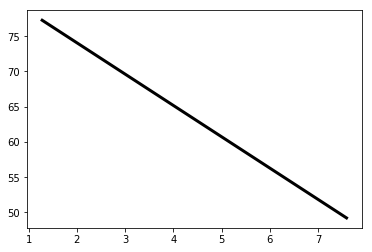 Train and test sets are vital to ensure that your supervised learning model is able to generalize well to new data. This was true for classification models, and is equally true for linear regression models.

you will split the Gapminder dataset into training and testing sets, and then fit and predict a linear regression over all features. In addition to computing the \(R^{2}\) score, you will also compute the Root Mean Squared Error (RMSE), which is another commonly used metric to evaluate regression models.

Cross-validation is a vital step in evaluating a model. It maximizes the amount of data that is used to train the model, as during the course of training, the model is not only trained, but also tested on all of the available data. you will practice 5-fold cross validation on the Gapminder data. By default, scikit-learn’s cross_val_score() function uses \(R_{2}\) as the metric of choice for regression. Since you are performing 5-fold cross-validation, the function will return 5 scores. Your job is to compute these 5 scores and then take their average.